Thermometer works at <1K in 5ms and needs no wiring

Exploiting a quantum principle in a novel way, researchers at the US National Institute of Standards and Technology (NIST) have created a miniature thermometer that works below 1K with errors less that 14mK and a response time of 5ms. 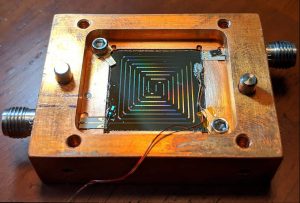 Two of the novel temperature sensors (top right, bottom left) are bonded to a chip under test. A conventional wired ruthenium oxide thermometer is also included  (right, near top)

All that, and it needs no extra wiring, nor lasers, as it borrows what ever conductors are in the device under test.

“This was a fun idea that quickly grew into something very helpful,” NIST scientist Joel Ullom said. “The thermometer allows researchers to measure the temperature of a wide range of components in their test packages at very little cost and without introducing a large number of additional electrical connections. This has the potential to benefit researchers working in quantum computing or using low-temperature sensors in a wide range of fields.”

In the technology demonstrator, the team used three of the sensors to monitor temperatures on a kinetic inductance travelling-wave parametric amplifier (see photo). They see it as a useful technique for monitoring the temperature of processor chips in superconducting quantum computers.

In principle it is simple: a temperature-sensitive LC tank circuit is coupled into any microwave signal path that is passing through the device under test, and its resonant peak can be seen from outside the cryogenic system using a vector network analyser.

In this case, there were two types of sensors, both around 2.4 x 1.2mm and designed to resonate between 1.5 and 6GHz with a ~4μH meander line inductor and ~2pF planar interdigitated capacitor – made with a single lithographic step on a silicon wafer (1,200 can be made on a 75mm wafer).

Sensing is across 50mK to 1K, and the range can be shifted down as far as 5mK with slightly different designs. Sensitivity is 50 – 75μK/√Hz.

As they need no additional wiring (unlike the conventional ruthenium oxide thermometer in the photo (grey right)), the sensors cannot introduce electromagnetic interference or conductive heating into the device under test.

But why are they temperature sensitive?

The shift in resonant frequency of the LC circuits is not due to anything simple like thermal contraction.

Instead it is due to a quantum interaction between the LC and a layer of silicon dioxide dielectric coated over the inductor and capacitor tracks – which are etched from superconducting niobium.

“The coating interacts with the resonator to shift the frequency at which it naturally vibrates,” according to NIST. “Scientists suspect this is due to atoms tunnelling between two sites, a quantum-mechanical effect.”

Tunnelling is between two quantum superpositions. Even though the science is not fully understood, the phenomenon – known as a two-level system or two-state-system, is well known and well characterised.

According to the paper ‘Sub-kelvin thermometer for on-chip measurements of microwave devices utilizing two-level systems in superconducting microresonators‘, it is these temperature dependent two-level systems that interact with microwave photons to shift the resonance.

The paper, published in Applied Physics Letters, is available in full without charge. It clearly explains the quantum interaction, and goes on to put the sensors in perspective: “While [these] thermometers will not replace conventional resistive or diode thermometers in sub-kelvin cryogenics, in certain situations, they are more convenient. In particular, the thermometers provide a tool below 1K to measure the on-chip temperature of cryogenic microwave devices, such as microwave kinetic inductance detectors, microwave SQUID multiplexers and qubits. The thermometers can be frequency multiplexed alongside these devices utilising the existing feed line and read out with the same infrastructure.”